On May 7th, 2016 the organization I co-founded, IoTFuse held an Internet of Things (IoT) Makeathon, which was titled the, “IoT Pre-Mother’s Day Makeathon,” given that it was held the day before mother’s day.

I strongly believe in the makeathon format as a vehicle for idea generation and innovation within the, “Internet of Things.”  We are at an age where technology has advanced to the point where from a hardware prototyping standpoint, people, not just highly trained engineers, but people of all different stripes, can easily prototype amazing connected inventions within a short timeframe.  We are living in an age where using open-sourced electronics hardware platforms such as Arduino, we can focus on, “what to build,” rather than, “how to build it,” which opens up the floodgates of creativity and value in much the same way that software deployment via internet collaboration has done over the last decade.  What’s great about the makeathon format is that this creativity takes place in a social realm.  IoT Makers from nearby areas are able to meet and hang out with each other, feeling relaxed, having fun and allowing minds to expand while doing what they love.  This environment is one that allows us to move upward among the levels of Maslow’s hierarchy of needs, gaining social fulfillment and bits of self-realization along the way as we accomplish tasks which we thought were not possible.

This face-to-face social interaction among like-minded intellects is something that has often been missed in our modern, remotely-connected world: the spontaneous, productive yet non-work-related, effect of creativity through fun and serendipitous social interactions among diverse mindsets.  Community-driven makeathons today truly are a marketplace of ideas, the modern-day analog to the Ancient Agora of Athens, where schools of thought forming the basis of Science and Philosophy were born, the coffee shops of London in the early 1700s, where modern insurance was invented, or the role that taverns played in forming modern Democracy leading up to the American revolution.

We are living in a society and an age where innovation and creativity is more important than ever.  As the world transitions from an American-dominated economy to one in which multiple large, formally developing countries and regions such as China, India, Latin America and certain areas of Africa continue to contribute greater manufacturing and innovation prowess, we need to find ways for our own citizens to train themselves to become even more innovative, and add greater value through creativity and exploration for where we lack in numbers.  Makeathons are a way to achieve that self-training, to accelerate learning in a self-motivating, dare I say, “fun,” way.

With that being said, the following is an abridged run-down of the Pre-Mother’s Day Makeathon, which I had posted originally at our Meetup group.

First off, here’s a Twitter Feed of Pictures from the Day.

First off, congrats to our top three winners: 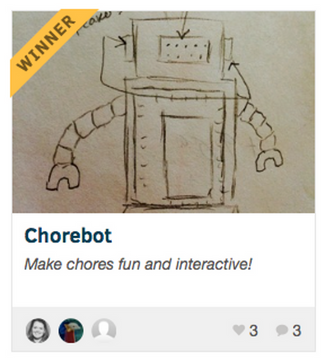 Angeliki returned to this IoT Makeathon with another extremely ambitious project, after founding the robotic xylophone team during the Fall IoTHackDay 2015, in which the team built a fully automated xylophone and hooked it to an EEG, all in one day, with a team of four.  Chorebot was another highly ambitious project where Angeliki and her team started from scratch and built both a physical containment robot body with “report buttons,” as well as a screen with a user interface, all in one day.  Her team’s ambition is truly incredible, and what they pulled off in one day in terms of both technology, and physical building of a nice-looking prototype is amazing and reminiscent of an episode of myth busters.  Kudos to Angeliki and team! 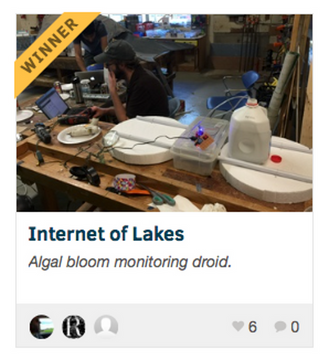 Another highly ambitious project from Doug T., who also happens to be the guy who originally proposed that we make this particular IoT Makeathon have a, “Mothers Day,” theme.  This project, which included five total team members, was particularly interesting not just because it is an environmentally-beneficial invention, being designed to get rid of invasive species in a sustainable way, but also because of its use of a vision system to detect algae.  This is an autonomous floating droid which essentially sits out on the lake, working away throughout the summer.  A mobile phone camera was strapped to an internal tube, through which lake water is pumped. An algorithm that the team built helps identify and filter out and separate algae from the healthy lakewater. 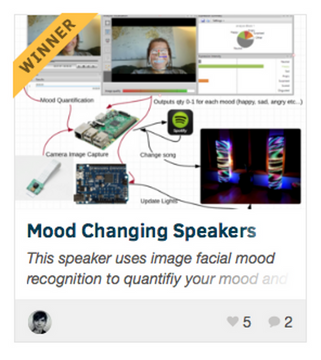 If you have met Brock personally, then you may already know that he is a visionary who pushes the limits of what people normally believe to be possible with the current state of technology, and that he truly embodies the IoTFuse spirit.  On Saturday, Brock and his team of two other developers started out with a pile of LEDs, a couple of old mobile phones, and a few dusty bluetooth speakers, and ended the day with exactly what he had promised – a system that uses facial mood recognition to reactively operate a speaker and LED light column in-real time, as well as play a song which coordinates with one’s mood.  It sounds incredible, but if you were at the makeathon that day, you would have seen that they actually did it.

Overall it was a great day, with amazing participation from experts and volunteers who came to help out.  Special thanks to our experts Jaim Zuber (Jaim’s Podcast), Theo Kanning (Android Developer from the Nerdery), Jake Berendes (Logo Design), Nick Velander (CAD Design & Manufacturing), Dale Brose (Marketing), Justin Grammens and Brock Johnson for helping to source prize sponsors, Jen Denglman for all of her help, support and for buying and bringing food, everyone who helped out and participated at the workshops throughout this year and of course thanks to our platinum sponsor the Nerdery, and hardware/IoT donations from Seeed Studio, Electric Imp, Intel, and Punch Through Design.

Huge thanks to Leonardo’s Basement, Steve J. and Connie R., for hosting us, and helping to spread the word about the event.  We definitely could not have done this without such an awesome maker-space to be able to work in.