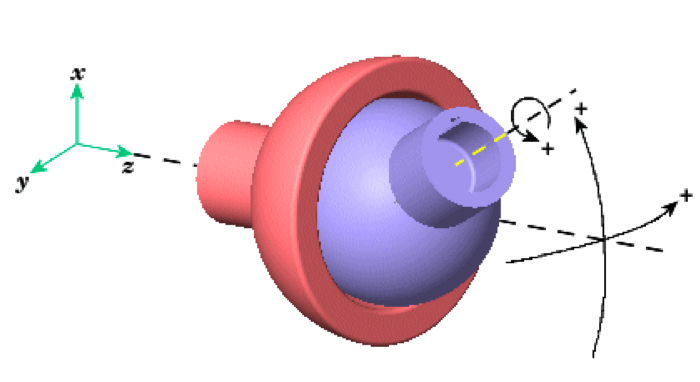 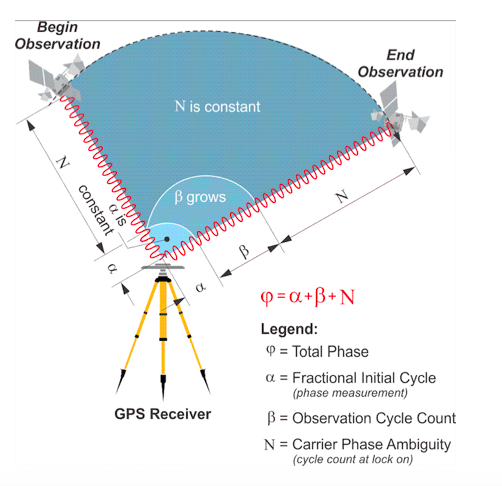 Note that this data from 8 different satellite signals is shown, varying in phase cycle magnitude based upon the movement of the arm. 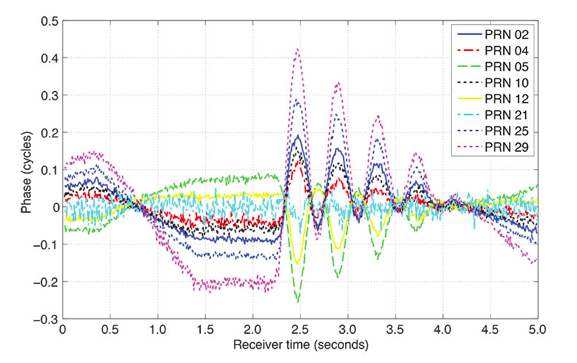 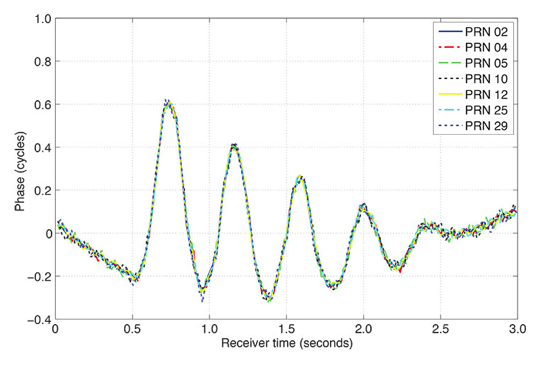 Modeling this Out In Matlab

Lacking an experimental setup, we can mimic phase cycle magnitude data over time in MATLAB by setting up a few data points, and then using a fit() function to build a function that will give us data similar to experimentally collected data.

We can first use a waveform generator tool which has a GUI that allows us to put data points onto a graph to form a function which gives a number of datapoints. 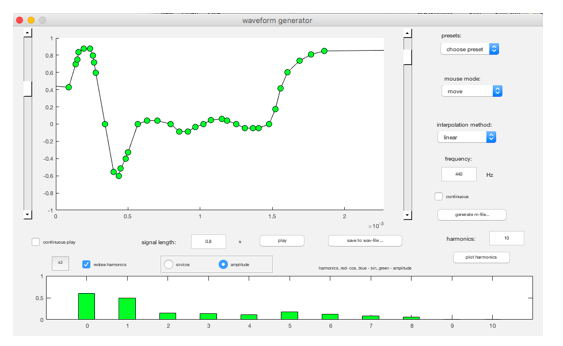 Once we have set up a set of data points which are similar to our experimental data above, essentially mimicking the articulating arm, then we can use the MATLAB fit() function, which is a part of the curve fitting toolbox, to build a function. 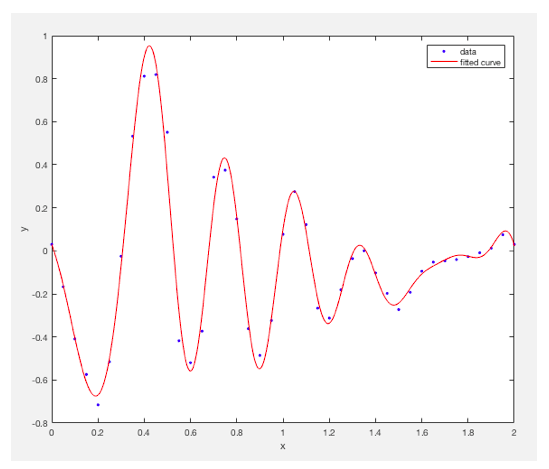 Once we have an adequate function, we can get Y values from the curve fitting tool using the properties of the function given, by generating a “YHat,” function from the fit curve, as follows: 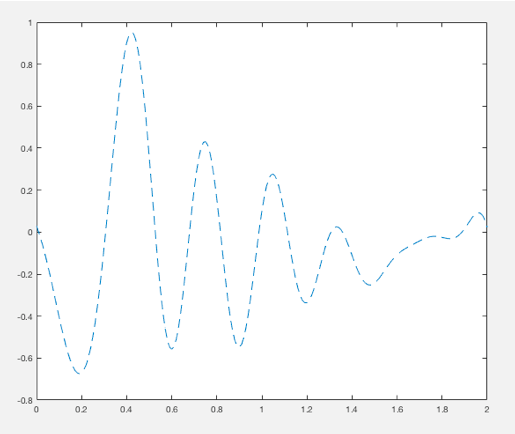 We can generate multiple signals which mimic the antenna arm articulation graph as shown above: 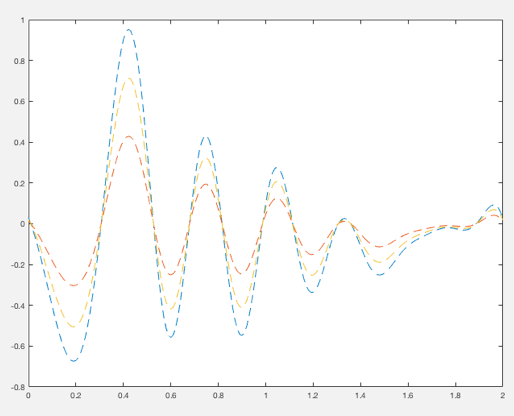 Several signals can be set at various points to mimic spoofed (e.g. non-articulating antenna arm data sent from a meacon source) as well, as shown below: 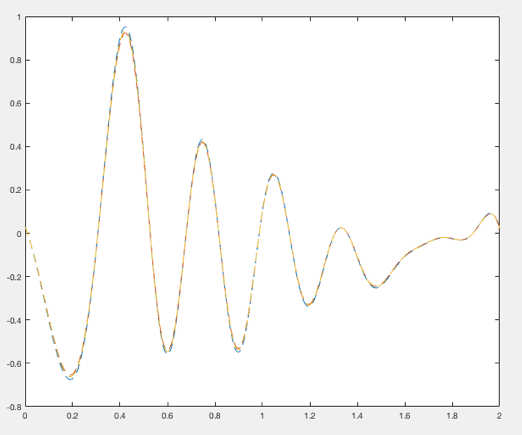 This data can be further randomized. We note that on the above charts the randomization magnitude is similar on both the articulating arm and the spoofed data, so we will randomize each similarly and shown below. We see that the randomization is approximately 10% of the maximum magnitude of the phase cycle measurement, across the board. 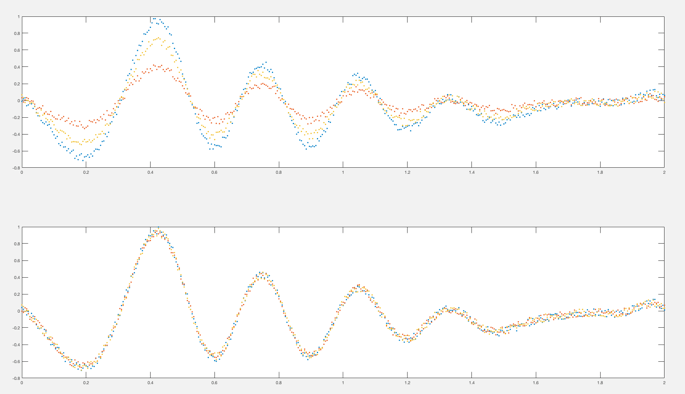 The above first graph shows differing decaying sinusoidal oscillations with randomized data points, as would be expected with an articulating arm antenna spoof detection system, detecting real satellites only. The second shows identical decaying sinusoidal oscillations which would be expected through detecting a spoofed signal with the articulating arm.

Looking At The Device Theory From a Purely Mathematical Standpoint 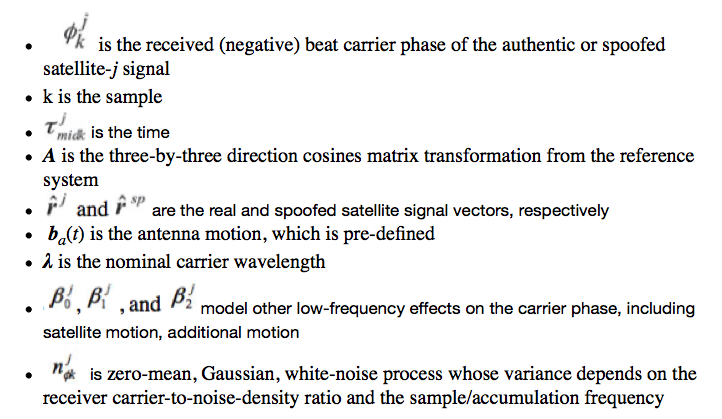 To simplify the understanding, what you really need is:

Figuring Out A Custom Hypothesis Test 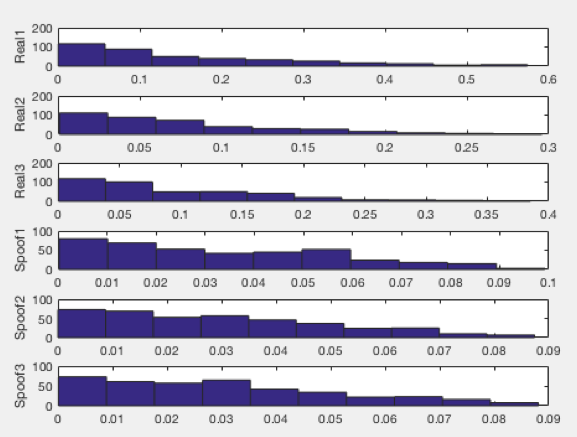 How Shall We Set Up a Hypothesis Test?

We have a distribution which is highly slated toward one side of the histogram. We can use this shape to create a hypothesis test based upon a pre-existing distribution class inherent in Matlab, or we can design our own custom distribution.

However, if we look at the data characteristics of the averages, we can see that there may be a simpler way to set up a test than comparing data patterns. If we look at the histogram of averages of satellite relationships as shown above, we see the following type of chart. The below histogram is actually a histogram of an average of three histograms, each corresponding to the difference between each satellite phase signal: 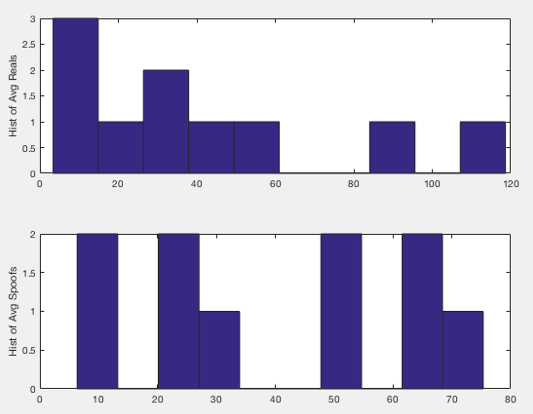 Note that the average histogram of the, “Spoofs,” includes counts of the difference which are all lower than 80. So we can create our own hypothesis test function which is of the following form: 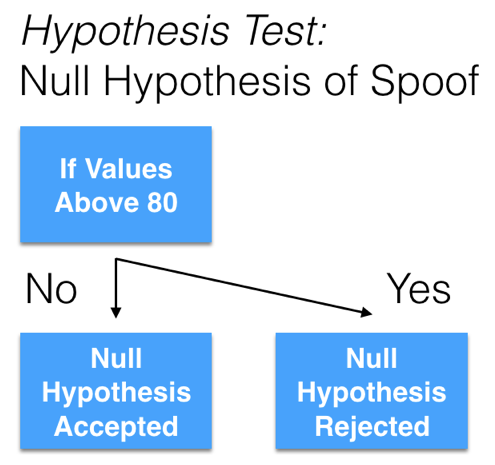 Of course, the quantity, “80” is a set point which can be changed according to the sensitivity that is needed to fit the spoof-detect application.

Upon setting up the appropriate if/else code, we can determine whether the spoof null hypothesis was accepted or rejected given the, “80” value.

That being said, it is important to note that these below results do not represent, “spoof,” or “no spoof,” but rather the “Good” signal represents the rejection of a “Spoof Null Set Hypothesis.” That is, the default hypothesis is that there is no spoofing going on - but upon receiving a certain type of signal transform as noted above, “spoof,” is the accepted result.

If we run the test multiple times, we can see that there is a chance that we will not receive a rejection of a Spoof Null Set Hypothesis, even though a spoof was present. 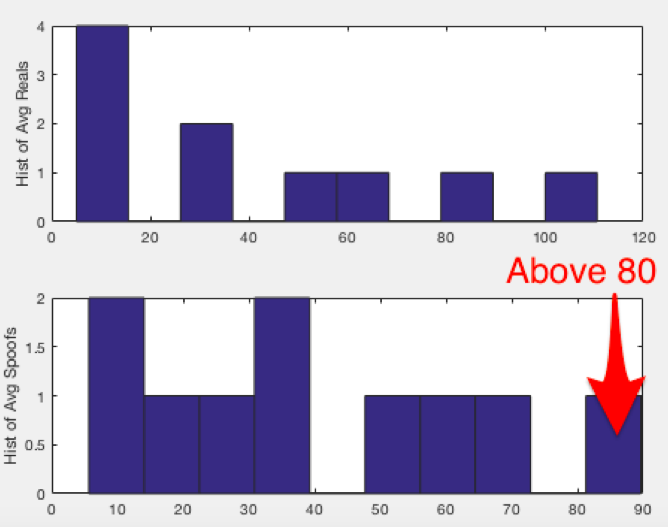 This can be tweaked in our very simple algorithm by simply adjusting the set point to 90 rather than 80, as shown below. 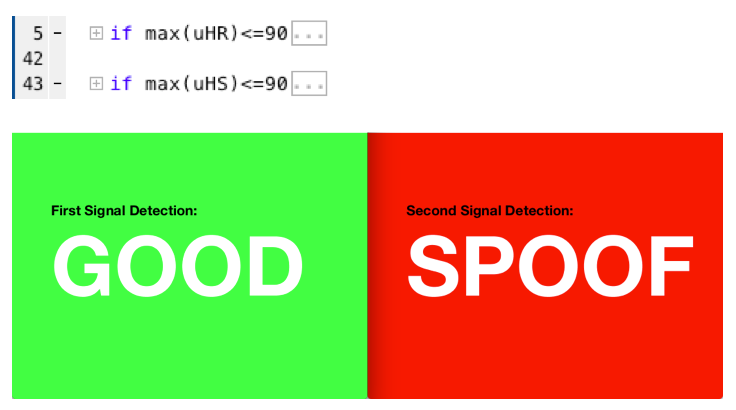 Improving Upon the Algorithm Given Simple Algorithmic Tools

To really improve upon spoof detection to a fine-grain amount, one must adapt a system such that a given spoof curve will use more complex hypothesis test which compares a given shape of a histogram to a certain class of extant histogram within the given computing environment. This type of testing must be improved over time through testing done in a laboratory setting. That being said, if one wanted to play with the types of variables we have made available in this report, one could use additional curve fitting tools inherent in the data and build a hypothesis test based upon the curve fit of the histogram of averages, as shown below. 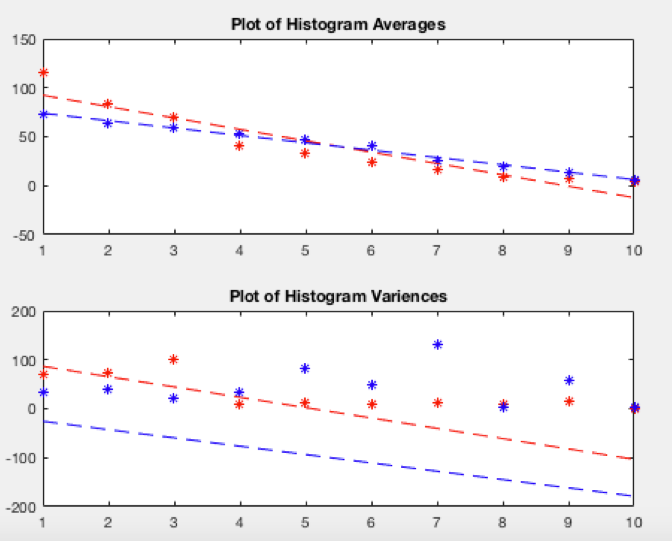 What If The Satellites Are Really Close To One Another? Or What If The Noise Is Increased?

As mentioned above, going into more accurate spoof detection methods involves comparing different distribution patterns to the distribution patterns we receive in our detection methods described above. If there is environments with increasing noise or decreasing satellite spread, making the difference relationships smaller, we can use different types of hypothesis testing methods that can be tested using tools already existing in Matlab, and later written into a computing environment. One example hypothesis test we can use, which does not require the purchase of a Signal Processing MATLAB package, is the Burr Distribution method: 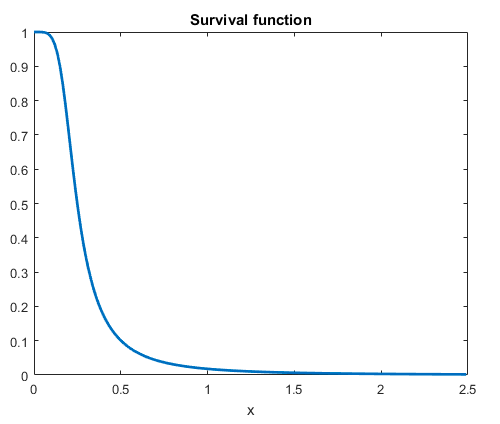 Hypothetically, we could use a Chi-Squared hypothesis test to determine if our profile fits a given Burr distribution profile that we’re looking for. This would hypothetically be more accurate than the simple, “cutoff method,” described above - but of course that set distribution curve would need to be determined experimentally and shown to be reliable. There are other forms of common distribution patterns we could model after - this is merely one example.

Basically the Neyman-Pearson lemma is a hypothesis test just like the above, “cutoff method,” where we either reject or accept a null set hypothesis based upon whether a transform curve fits a certain cutoff parameter. This is different than a, “fit test,” where multiple data points are being tested, but it is more precise than the, “cutoff method,” because it is looking at the entire curve rather than one point on the curve.

This project was done for a remote client.

The full project results are discussed above.