Gartner published an article on July 28th, 2020 arguing that, “IoT’s stand-alone marketing impact is disappearing.” As an electrical engineer, software developer, product manager and engineer, this term has been of keen interest to me over the last decade. I have been such a huge, “IoT fanboy,” that I went as far as to cofound a conference, called the IoTFuse Conference in 2015 which grew to be a nationally recognized event. I thought it would be interseting to dissect Gartner’s thoughts because:

Gartner puts forward a hard-numbers prediction that the term, “Internet of Things,” will serve less as a communication mechanism measured by percentage of service providers using the term. Gartner is asserting that - broadly speaking, the term, “IoT,” will fade as, “[solutions] … are commoditized.” Gartner rests strategy recommendations in this paper on the assertion that, “by 2024, fewer than 30% of technology and service providers with IoT portfolios will include the term “IoT” in their messaging, down from 60% today.” Putting an actual number and date on a prediction is laudable because it’s falsifiable. Falsifiability is important in predictive sciences because if one makes a prediction that doesn’t include a hard timeframe and a way of quantifying or classifying what is being predicted, one’s prediction basically amounts to “hand waving,” meaning it’s not really even a prediction, it’s just talking around a subject using rhetoric.

That being said, the more falsifiable a prediction is, the greater range of possibilities that it could be wrong, and the higher chance for reward if it’s right - which is actually what makes these discussions interesting!

Gartner makes specific strategic recommendations based upon their prediction. An overly simplified way of summarizing their recommendations is that, “The risk capital is gone from IoT.” Gartner asserts that because IoT solutions have been commoditized, any internal IoT projects which get proposed may need to have shorter payback periods associated with them than previous years. I actually agree with this recommendation and have heard many of my IoTFuse subscribers, attendees from engineering divisions across different industries tell me that there has been a shift between 2017 and 2020 or so.

Of course Gartner’s perspective is aimed at a C-Level audience, as their main clients are CIO’s, COO’s and people who are interested in operational technologies from a budgeting and accounting standpoint. They sell information services to large companies and Fortune 500 companies, so there is an incentive to create an image of continuously moving forward, to make falsifiable predictions and also for Gartner to in a sense gain ownership over mnemonic terms. While Gartner may not be as much attempting to predict where the world will go from a bottom up approach as they are sway the opinions of their customers and convince these customers that they need to continue to purchase need Gartner products.

While of course it is a truism that trends and products do have lifecycles, predicting and timing those lifecycles is incredibly difficult. This difficulty is compounded when you take into account the fact that some products and concepts are very narrow and mean a definite thing to certain audiences, for example the concept of a Virtual Private Network, or VPN, while other concepts are much more broad, as with the Internet of Things. The Internet of Things is really more of an abstraction meaning different things to different professions whereas a VPN is a defined communications system. Some industries and sectors do not even use the term, “The Internet of Things,” such as the medical and healthcare sector, which tend instead to use the term, “Telehealth,” as a catch all to include many health sensing devices which are indeed internet connected and use many of the Internet of Things protocols and platforms that people keenly interested in the term, “Internet of Things,” work on all the time. 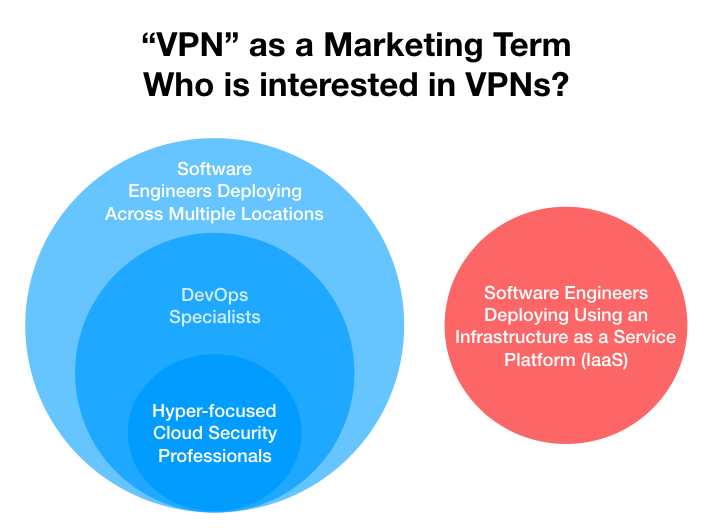 That being said, VPNs are very much the domain of folks who are hyper-interested in that one narrowly defined communications protocol, so everyone who is at the center of that, “Interest Sphere,” probably already knows each other and has known each other for 20 years or more. There would not really be much point in holding a conference or putting out networking resources and vastly creative knowledge articles around a narrow concept.

Contrast that with the Internet of Things, which has widely different spheres of interest encompassing different professions and people. 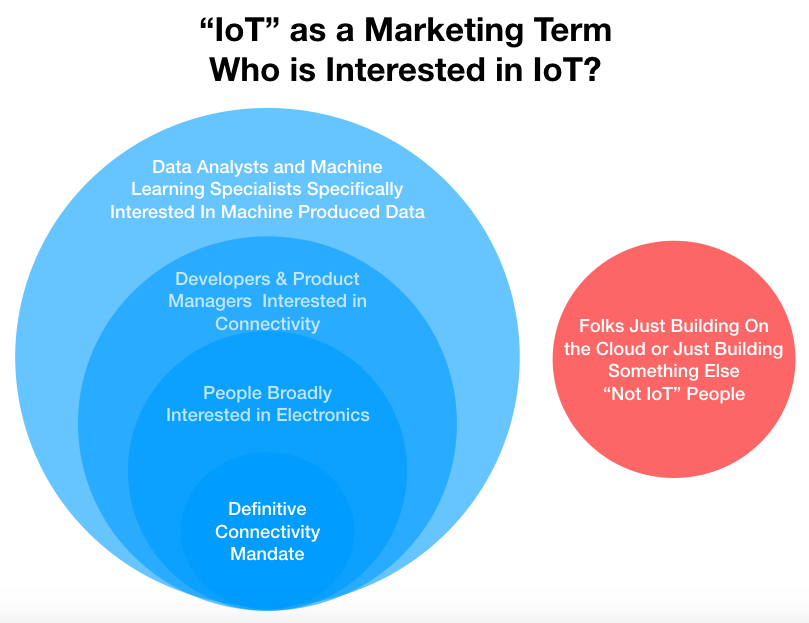 If you compare the usage of the term, “IoT” vs. VPN over time using Google Trends as a proxy for interest level, obviously there is a huge underlying usage rate of VPNs, even though it is not a sexy concept that one might build a conference about, or put an advertisement for on the side of a bus. The exception to the usage of VPNs as a sexy marketing term might be perhaps talking about VPNs in the context of protecting one’s personal privacy, essentially, “Personal VPNs as a Service,” which is really only a tiny minority of all use cases of VPNs.

So since the year 2000, when the last VPN Conference seems to have taken place, “VPNCon 2000,” as far as can be gleaned from a quick online search, the sexiness of the term VPN has died down, but the usage of the term has continued. If you compare this to other technology trends within the same timeframe: 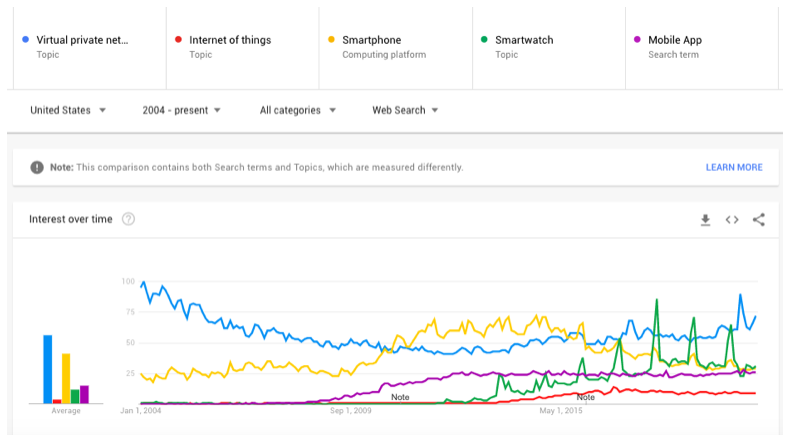 Similarly the term, “IoT” seems to have plateaued. However, if we consider who uses that term, and what kinds of professions are interested in what is for one crowd, “Connectivity for Electronic Stuff,” and for another crowd, “Lots and lots of machine generated data,” you could see the term perhaps having less, “IoT corporate risk capital,” in favor of, “IoT projects which demand a defined IRR.”

Arguing that the term, “IoT” will go down in usage by X percentage over Y timeframe is guesswork, at best. In reality, no one believes that there are going to be less connected devices, just like no one believes there are going to be fewer smartphone apps over the next five years. The entire problem space from connectivity to data analysis to standardization of data types is by no means solved, and therefore we could see more platforms come up, you could see a resurgence of the term based upon breakthroughs in the electronics industry with the advancement of RISC V, or you could see a huge die off as finance becomes tightened due to the slowing down of the economy. The best approach is likely a continual appraisal of where the terms are every quarter or so, rather than making an extremely bold prediction going out five years.